If you were a basketball fan in the 1980's, and you collected cards, odds are that came across Star Basketball cards.  Issued in team poly bags starting in 1983, the cards were the only licensed NBA issue from 1983 through 1985.  Since Star cards were the only issue for three years, and didn't have the typical sort of release via wax packs, they were not hugely popular in the early years.  In fact, the three year adventure was a money losing proposition for Star.

However, as Michael Jordan came to prominence, his cards from the Star sets (24 to be exact) continued to increase in value.  In this piece, we examine the history (at times checkered history) of Star, taking a closer look at the issuance over the years, while providing collectors some intel into our thoughts regarding the future of Star cards from an investment potential.

Table Of Contents
Robert Levin Launches Star
A Closer Look At The Various Sets
Type II Counterfeits Hit The Scene
The Shop At Home Scandal
The 'Shop At Home' Cards In Question (And To Avoid)
PSA Won't Grade Em, But Beckett Joins The Scene
What's The Future Investment Potential For Star Cards?

Topps gave up on basketball cards, following their 1981-82 issue, mostly due to a lack of demand for the cards, and a lack of interest in basketball in general.  Entrepreneur Robert Levin garnered a license from the NBA to produce Star cards beginning in 1983, a span lasting three years.  The cards were issued to dealers via Star master distributors.

I remember purchasing Star poly bags of the Celtics back in probably 1985.  They were available, yet not a huge deal when they were released; team sets could be purchased for a few bucks, and they were by no means valuable.  Star cards could be purchased at local card shows, hobby stores and often at your local arena. 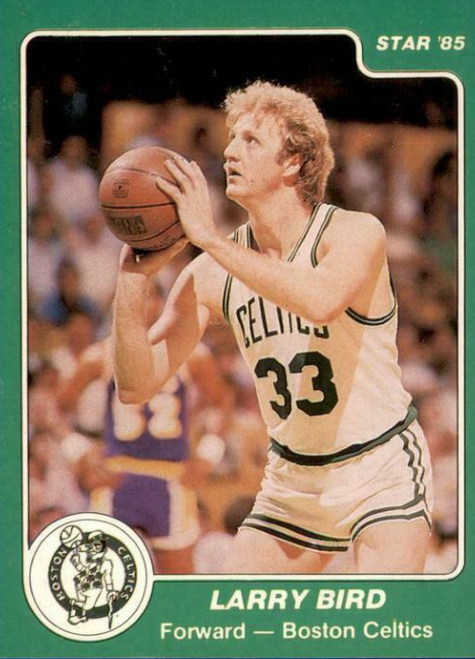 Since Topps stopped producing basketball cards following the 1981-1982 set, there was a one year gap in which no licensed basketball cards were produced.  Thus, big time rookies cards were missed; cards that might have been, included players such as James Worthy, Dominique Wilkins and Isiah Thomas who started their careers around this time.

Star certainly filled a huge gap in the three years of its production of basketball cards, and without the cards, there would have been a huge number of rookie cards missed, and fulfilled only by the return to a major licensed issue from Fleer in 1986.

A Closer Look At The Various Sets 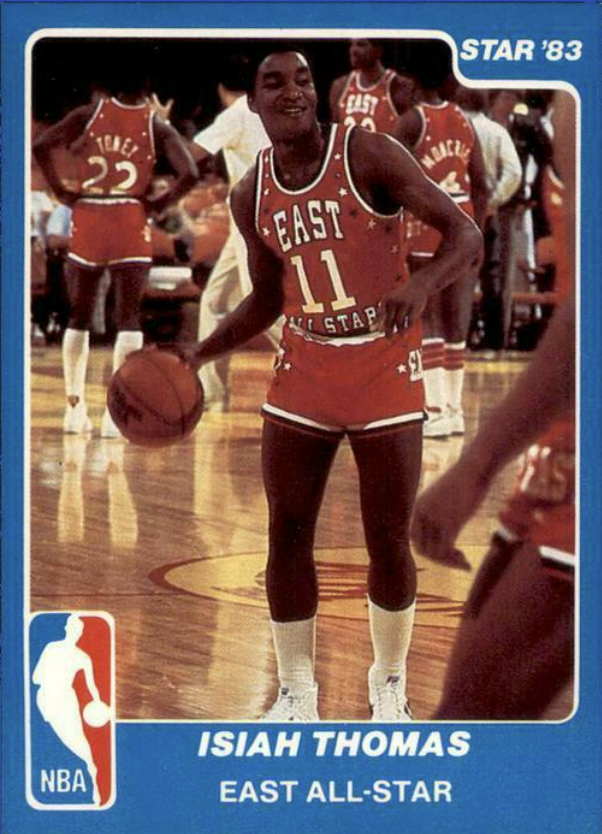 At some point in the late 1980's, some peculiar looking cards from the 1985-86 Star base set started circulating.  Steve Taft sums it up well in an interview with All Vintage Cards:

I bought 4 cards and there was just something uncomfortable about them right away.  This was 1992, plus or minus a year.  I sent one card in for grading.  It came back graded a Mint 9. However, in the week I spent waiting for that card to return from the grading company, I immersed myself in research. By the time the card returned, I knew it was not the original issue (despite being in a graded holder).

According to Taft, these cards, known as Type II counterfeits were ultimately stolen by a former print production employee and released to the public.  They were likely created around the same time as the 1985-86 set, but were factory rejects.

The Shop At Home Scandal

In 1997, Robert Levin, the founder of Star, was selling cards on the Shop At Home Network. Levin claimed that the cards being sold were unearthed Star cards produced during the initial Star run from 83-86. However, the cards were newly printed and back dated to seem like older cards.   Ultimately, the NBA sued Levin and a number of other associates for selling counterfeit cards. 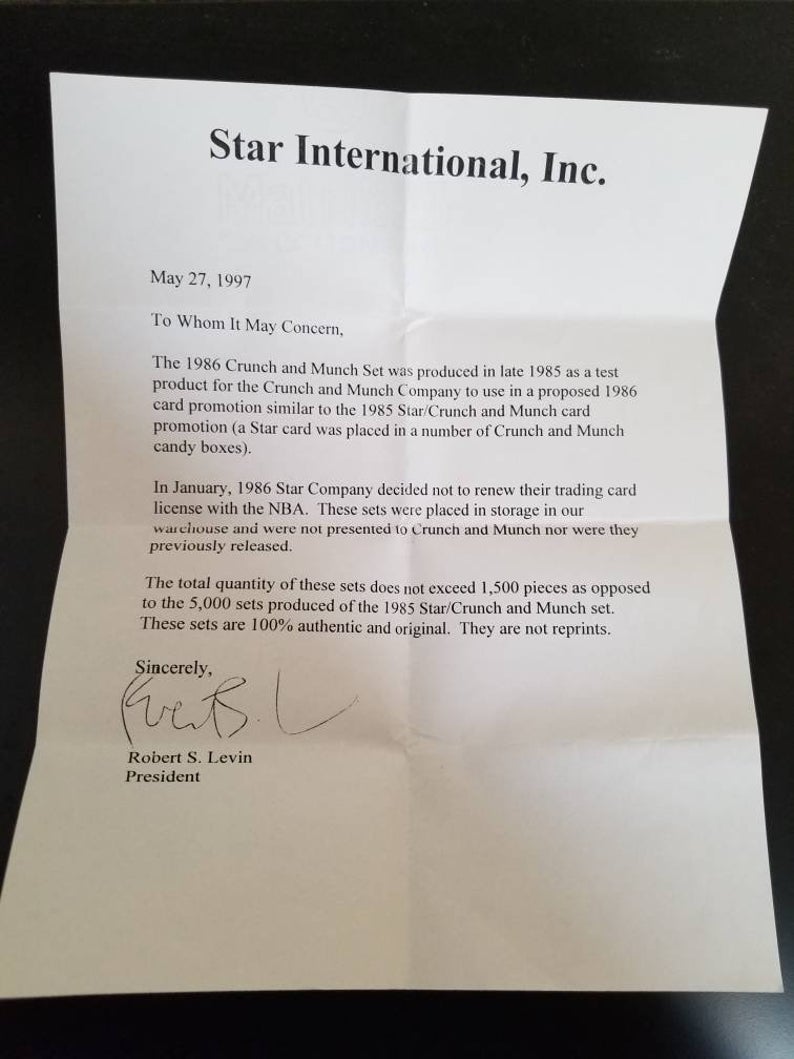 It should be noted that the cards known to collectors as the 'Shop At Home' cards were not previously produced cards, and in some instances a variation on other formerly created sets, including different years, different border colors, etc.

The 'Shop At Home' Cards In Question (And To Avoid) 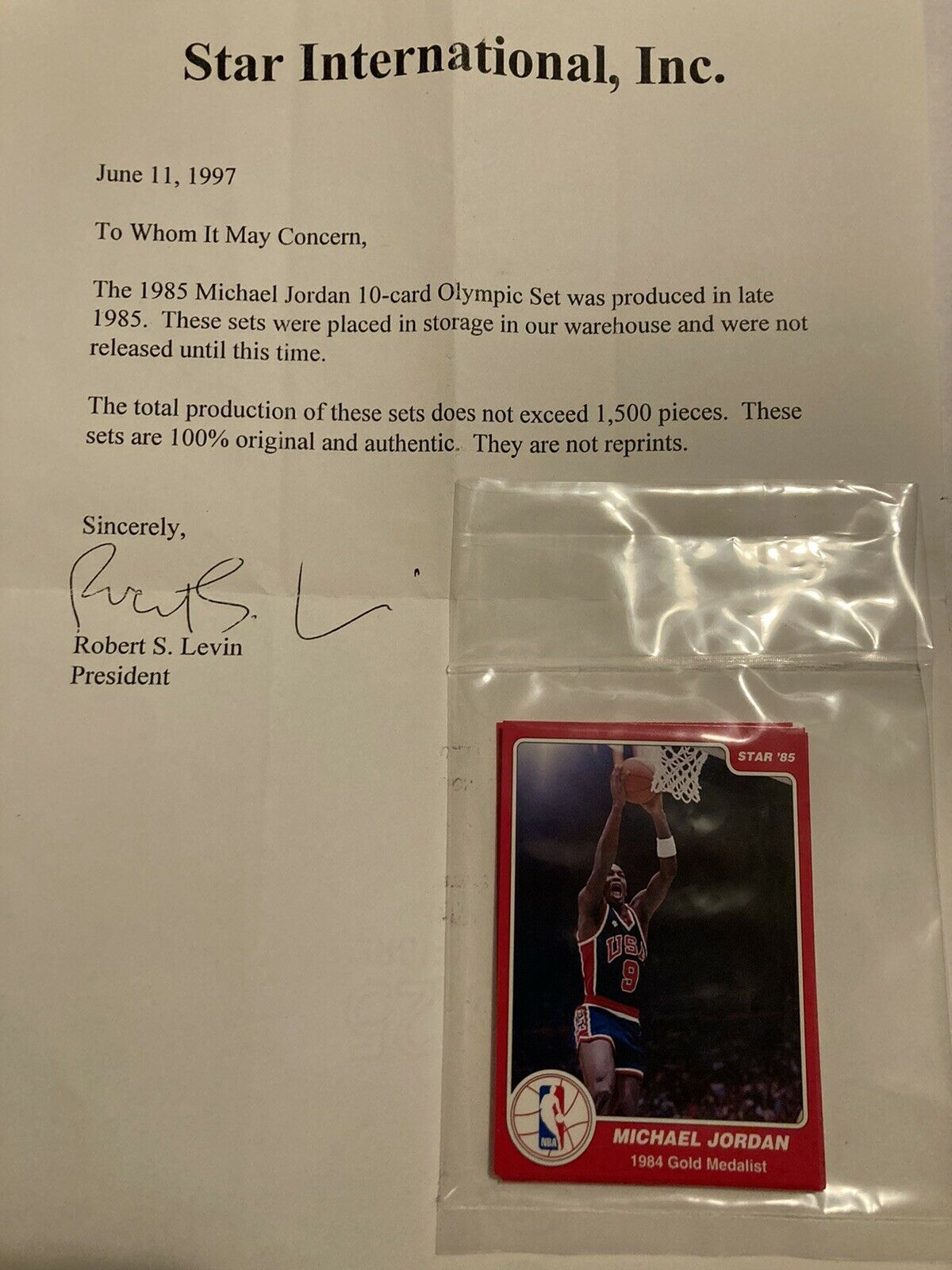 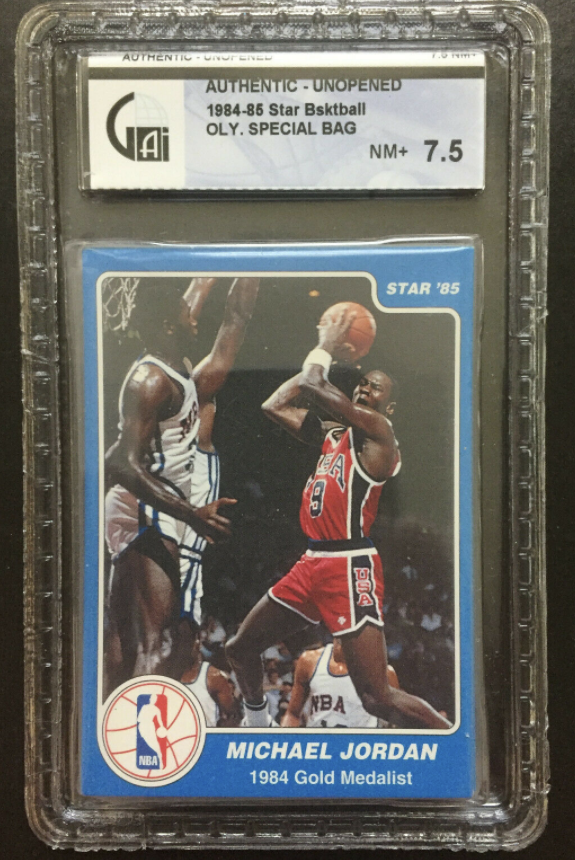 GAI was one of the early graders of Star cards, but not sure how they botched this one...maybe it was before the scandal? Note this is a definite Shop At Home card

Star 1984 Miller Lite Set - Shop At Home issue has white borders and '1985' date, note that there is an original 1985 Star Miller Lite set with blue borders. 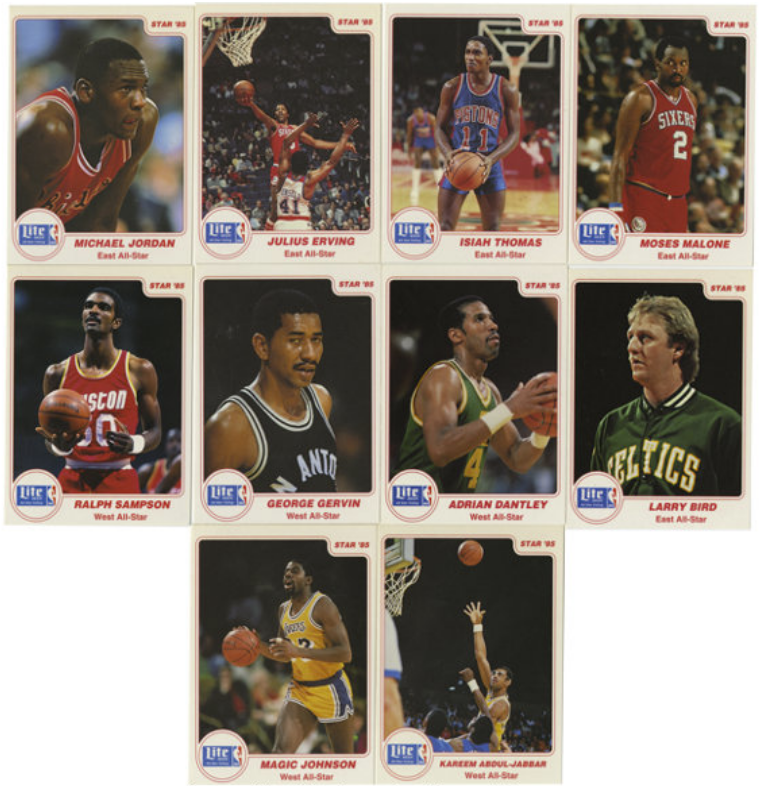 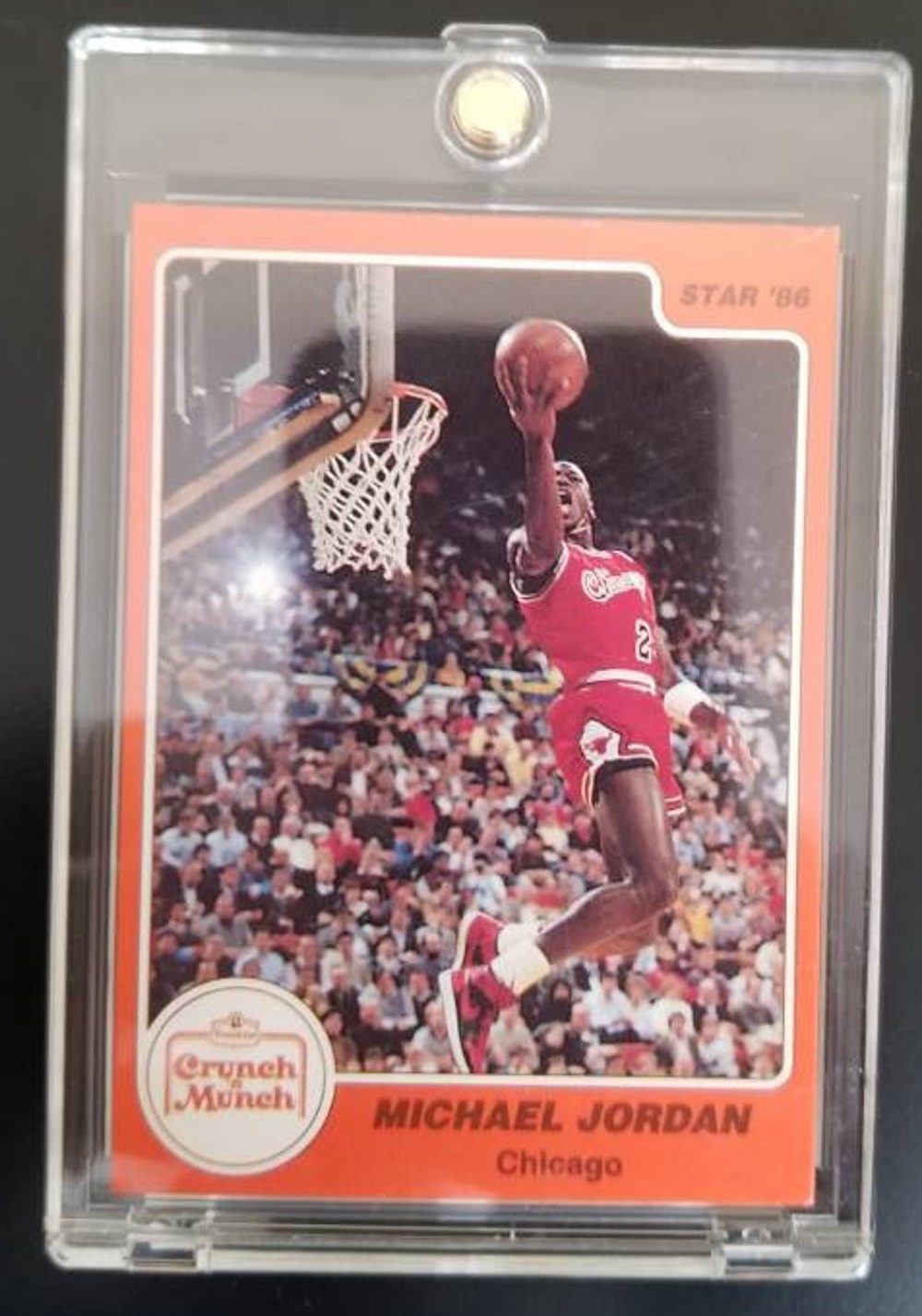 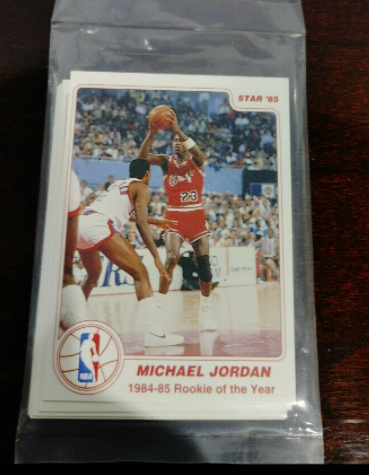 A Shop At Home Last 11 ROY bag, which is considered a counterfeit set

Star 1985-86 Chicago Bulls Arena sets - These Shop At Home sets will often fool unwitting collectors--especially when this exact bag was sold by a very well known seller on eBay. 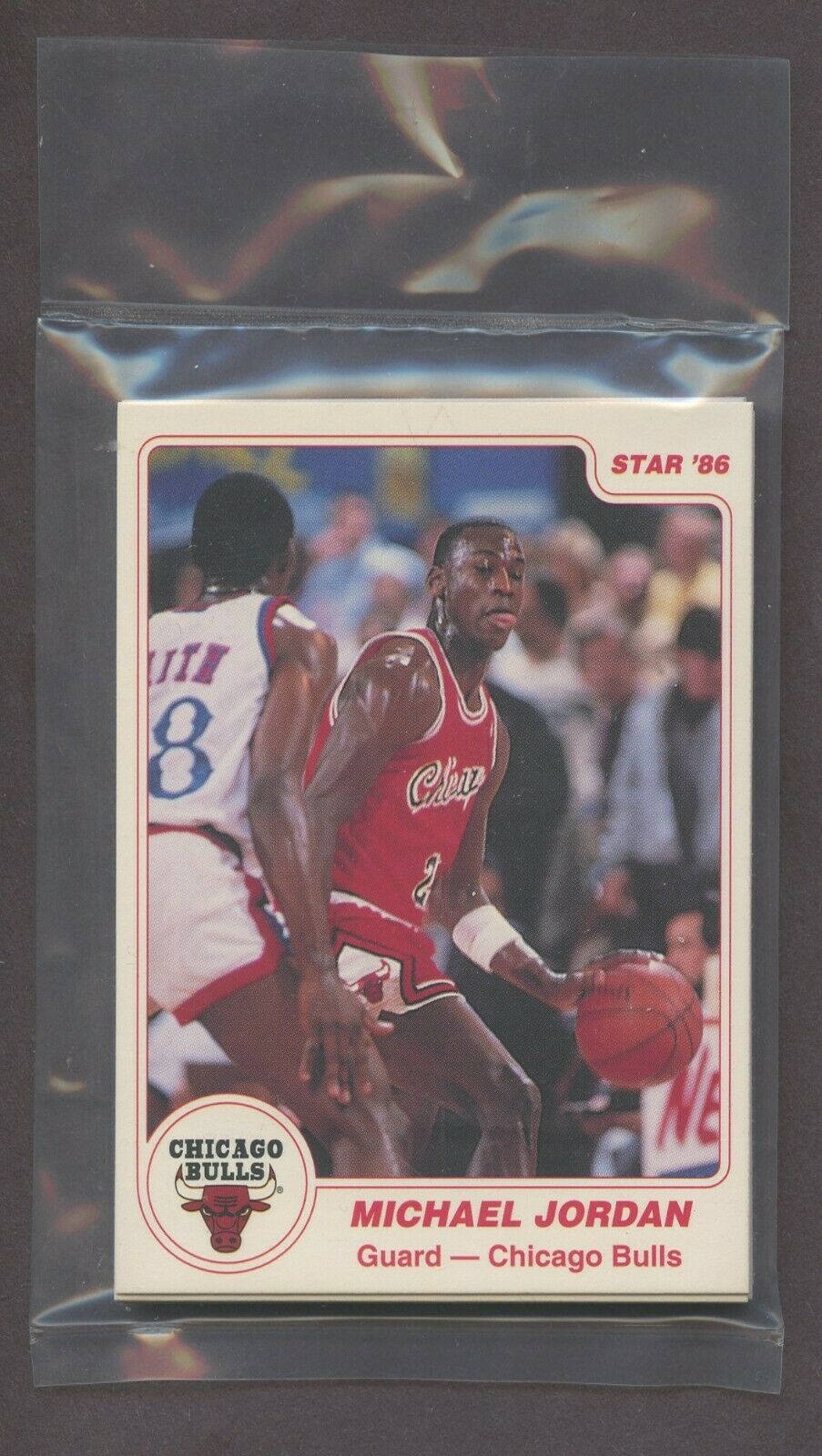 Star 1984-85 Court Kings (normal size cards) - note that there is a original, licensed 1986 Court Kings, normal size set, with yellow background, but that has a '1986' date in the top right corner..it also has red lettering. 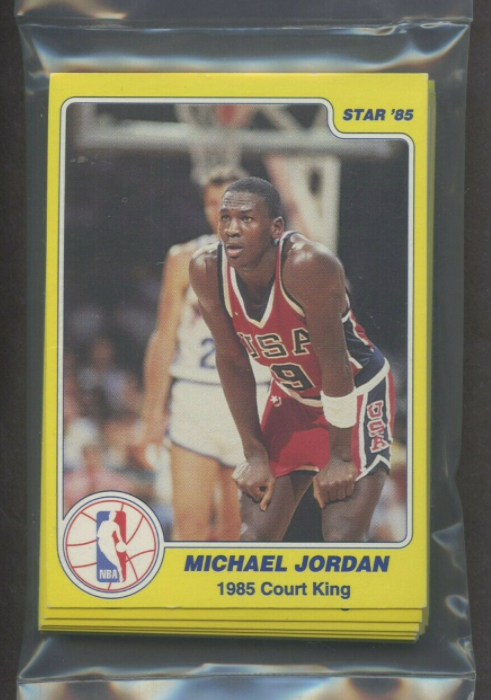 A Shop At Home Court Kings set--note that there is a prominent eBay seller that continues to sell Shop At Home products, such as this, as the real deal--their username rhymes with Hobstein.

Star 1984-85 All-Rookies (blue border) - The Shop At Home All-Rookies set as shown with the Jordan card below has blue borders.  Note that there is an identical card in the authorized issue from the 85-86 All Rookie set but it has red borders. 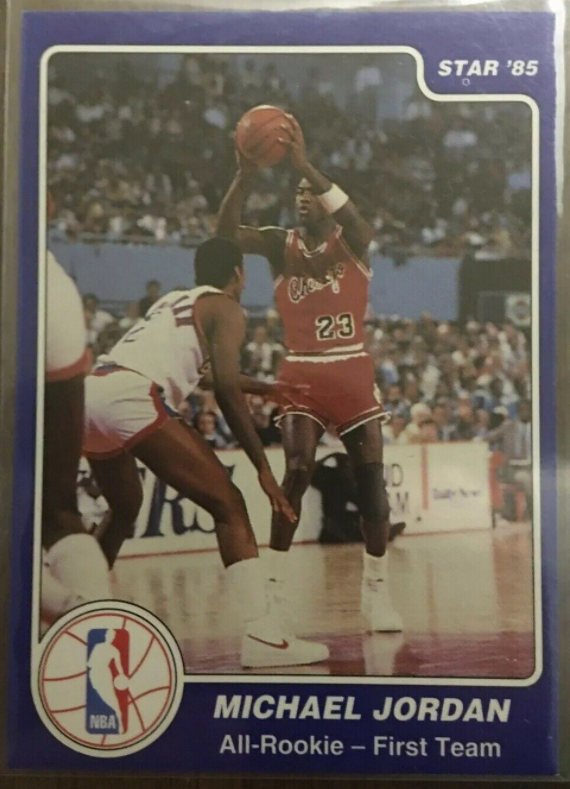 It's clear that the Shop At Home cards left a confusing stain on the state of Star basketball cards in general.  I should also note that prior to the Shop At Home scandal, there were pre-production press samples or even factory rejects that were illegally stolen by a former print production employee and released to the public.  Thus, it's quite clear, that without the right information, it could be difficult to authenticate Star cards. 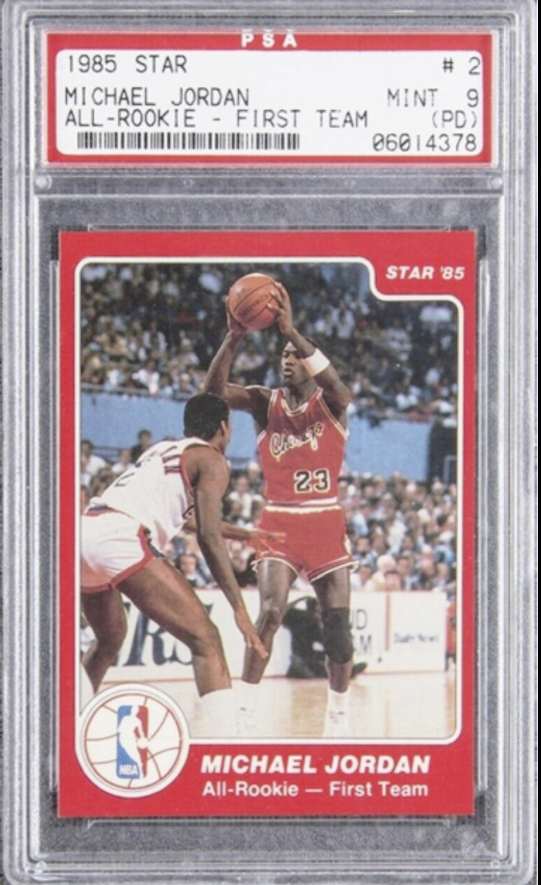 Beckett got into the mix in 2008, and remains the only third party grader that will grade Star cards.  I will also note that SCD and GAI did grade Star cards early on and were fairly reputable, despite some mistakes--one that I had pointed out early in this piece.

Despite some massive price increases over the past few years (note that many Jordan Star cards have increased by 10x over the past year), I still think that Star cards are a solid long term investment.  If we examine the production runs (which in many cases were 5,000 or lower), it's clear that the cards from a supply perspective are much lower than any major issue from the era.

While the Jordan cards might be out of touch for some collectors, other stars of the day such as Dominique Wilkins, Charley Barkley, Hakeem Olajuwon, Isiah Thomas, Larry Bird, Cylde Drexler and others can be more affordable.  While the premier rookie cards continue to escalate in value, other specialized issues can be much more affordable.  I encourage you to explore this site more in detail to discover some of the Star sets available.