The 1985-86 Star Patrick Ewing #166 Rookie Card is one of the most desired and valuable cards in the set.  The issue is however plagued with controversy as a late 1980's scandal brought to market some unauthorized counterfeit cards of Patrick Ewing and the entire second series (cards #95 to #172) of the 1985-86 Star set.

The good thing about the Type II Ewing rookie cards is that they are very easy to identify.  After reading this guide, I can hope that you are not fooled by any scammer trying to sell one as the real deal.  Below, I have the Type II Counterfeit Ewing on the left (this one is actually autographed), along with the real deal on the right.

Notice on the original card how there are clean edges in the white borders that surround the photo of Ewing.  On the Type II, you'll notice how there is white spilling out, both on the inside and the outside border of the frame. 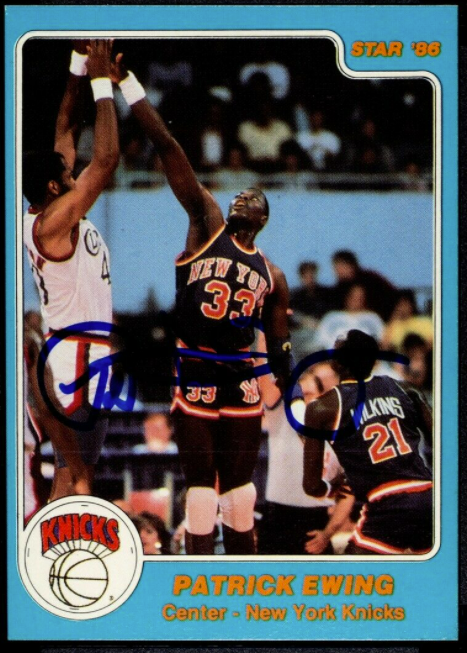 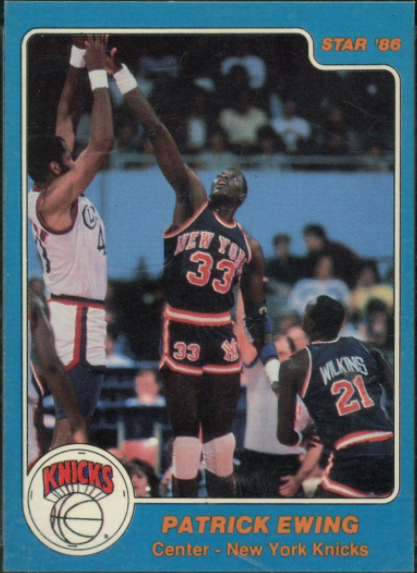 The original Ewing rookie card was also cut wider; see how on the original card there is a wider border on the left hand side?  If you find any authentic graded Ewing Star rookies that appear perfectly centered, it is because they have likely been trimmed on the left side.

One other point of note - on the authentic Ewing Star rookie, there is a black dot on the bottom of the card right above the 'T' in 'Patrick'.  I've highlighted this dot below.  Note this dot does not exist on the Type II counterfeit (unless it has been added after the fact).

I will also note that with all of the Type II Counterfeits--any of the cards with colored borders will have some front border color "bleed" to the back edge(s).  From Steve Taft:

"The amount of bleed can vary a lot, from tiny specs you can only see with a magnifier, to bleed you can see very easily.  The bleed can be on one edge, or multiple edges.  Type II counterfeits do not have bleed, (assuming someone isn't adding bleed in an effort to trick potential buyer's)."

Note there are other counterfeits circulating aside from the Type II counterfeit Ewing.  Here is a common one that is very easy to identify. I've provided it next to the original for a comparison. The biggest difference being the variation in font used for Ewing's name and the Star text at the top right of the card. 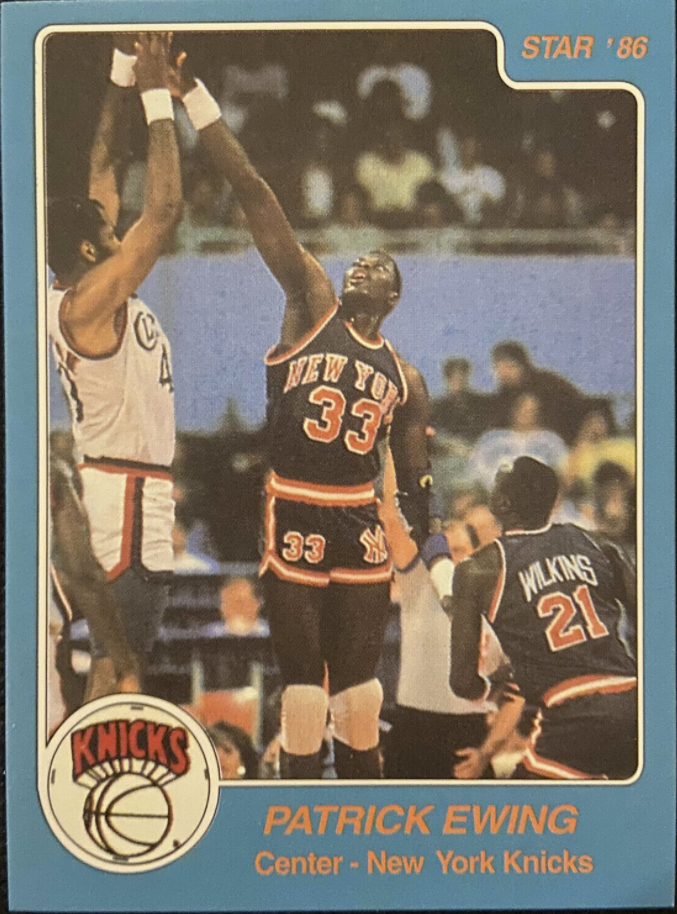 If you come across any additional Star Ewing counterfeits that we haven't listed here, feel free to let us know at help@starbasketballcards.com.